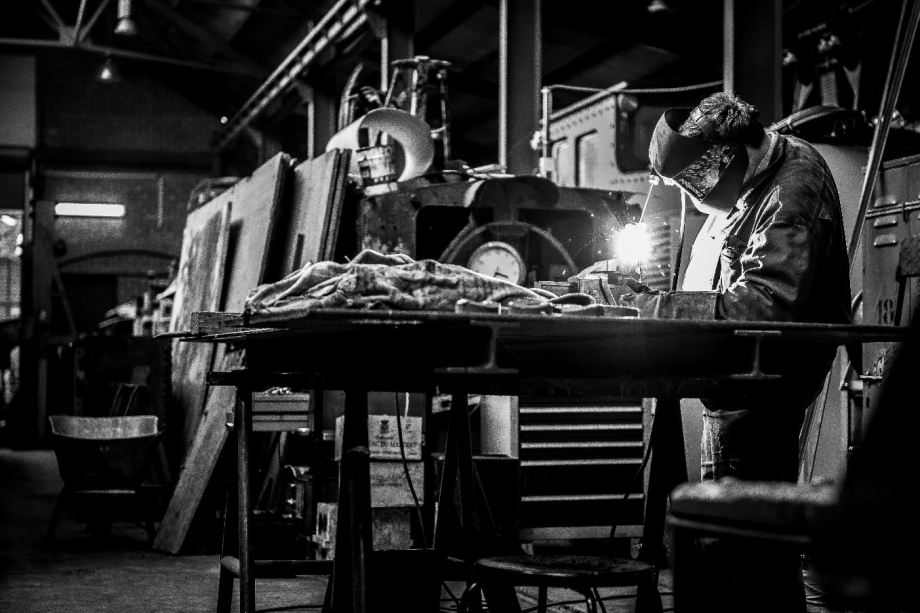 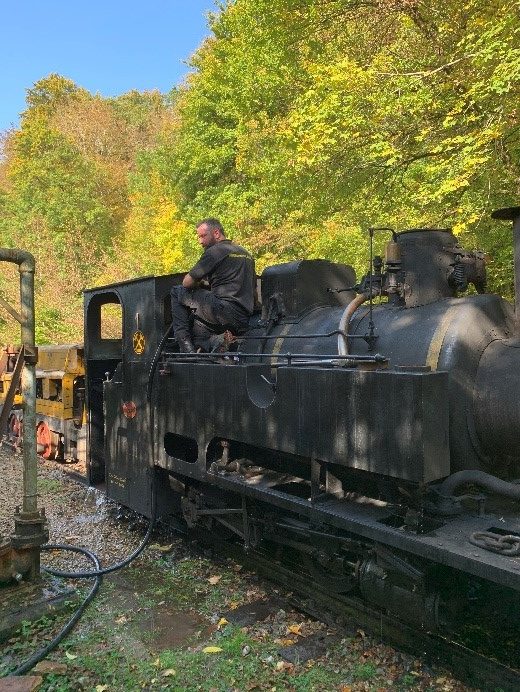 For the first time since the beginning of the tourist railway operation in Fond-de-Gras (1973), the season will not start on 1 May, due to the Covid-19 pandemic. Nevertheless, we would like to show you the work and other preparations made before the start of the lockdown.
Although our season only lasts a few months, winter is not quiet at Minett Park Fond-de-Gras. Above all, it is a time when a lot of maintenance and repair work needs to be done to keep the historic locomotives running.
At the end of the season, the locomotives have to be emptied and cleaned so that frost and dampness do not cause damage during the 5 months of immobility in the unheated halls. Minor maintenance on taps, valves, indicators, levers, etc. is done. Later on, the pipes are swept, the washing holes are opened and the boiler is thoroughly washed with water, with the help of the fire brigade and their motor pump, to remove the sludge and scale. They are then ready for inspection in the spring by the Luxcontrol inspection body.

Before the forced shutdown, it was fortunately possible to complete the overhaul of the Cockerill 503 vertical boiler locomotive, which was to be the star of a centenary celebration. Its boiler’s five-year term had ended in 2018. During the preliminary inspection, however, some of its boiler tubes were found to be heavily corroded, so that a replacement of the entire bundle seemed indicated. This was a delicate and difficult job given the narrowness of the interior of this boiler! The hydraulic test was passed and a few test runs were made without incident or problem, except for a few adjustments. 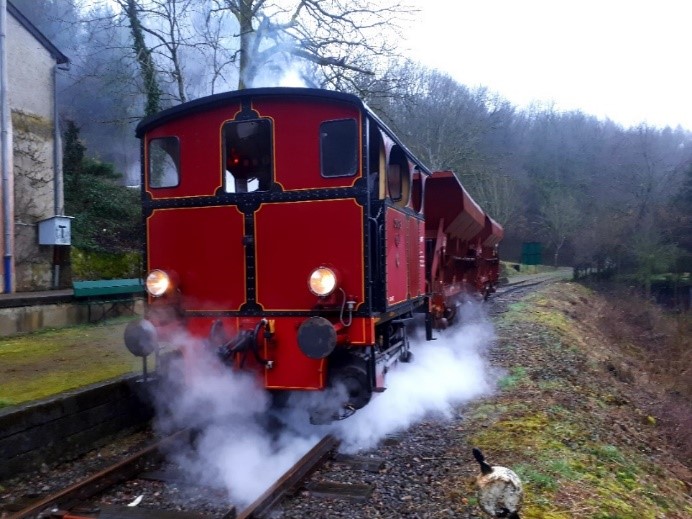 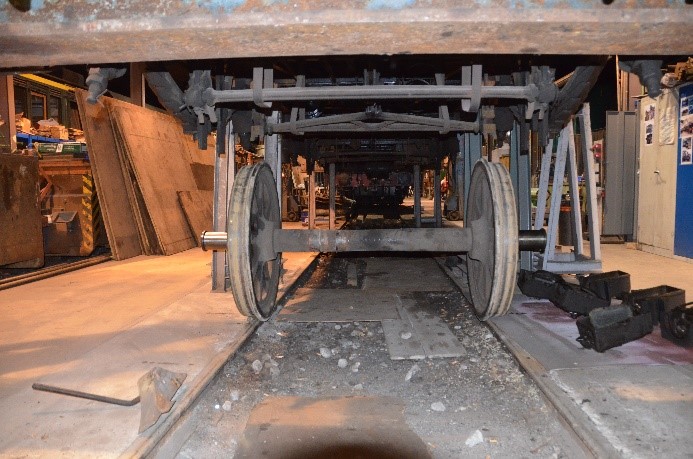 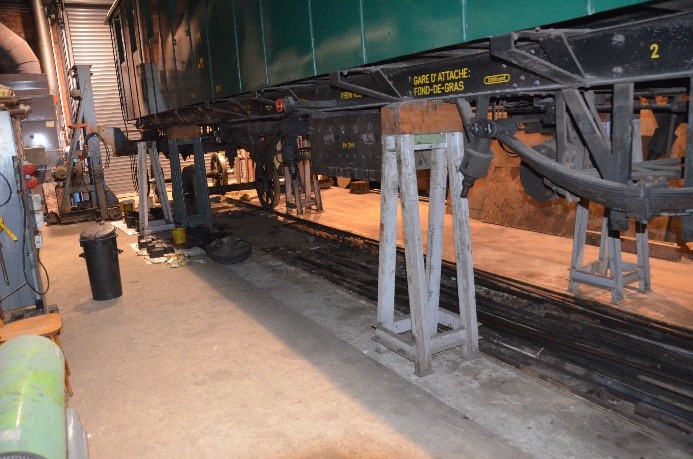 Revision of the ex PH 410 carriage

In 1997, Train 1900 – AMTF launched a project to restore a set of typically Luxembourgish coaches that marked the railway landscape from 1905 to 1967. These are the 3-axle coaches of the Prince-Henri network.
These restorations were carried out in the Czech Republic with the financial support of the Ministry of Tourism and a private sponsor. Now it’s time to give them an overhaul to ensure their impeccable condition in the future. This winter, it was the PH 410, built in 1905 and put back into service for the 2000 season, that was on the programme. Lifting, removal of the axles, checking the axleboxes and springs. The braking system was overhauled and other work made necessary by 20 years of service. This work was carried out jointly by Train 1900 volunteers and the ProActif team, calling on external firms for specific operations (brake distributor, ultrasonic checks) until mid-March when activities were halted because of the pandemic.

In the station building at Fond-de-Gras, some members have carried out a complete renovation of the waiting room. This is a continuation of the refurbishment of the various rooms of the building which AMTF acquired in 1986. 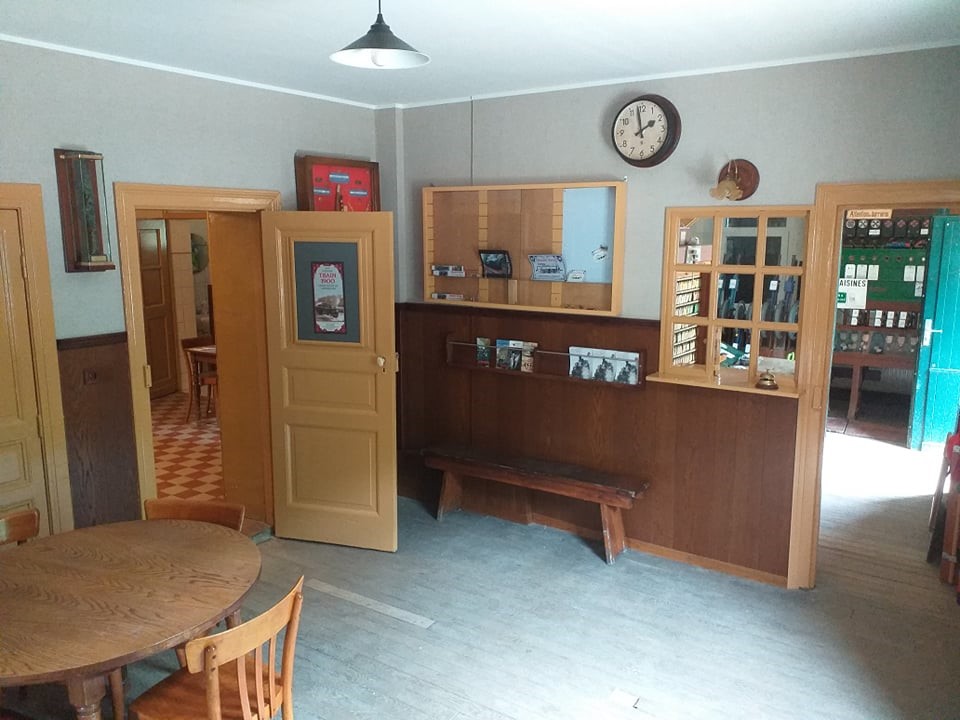 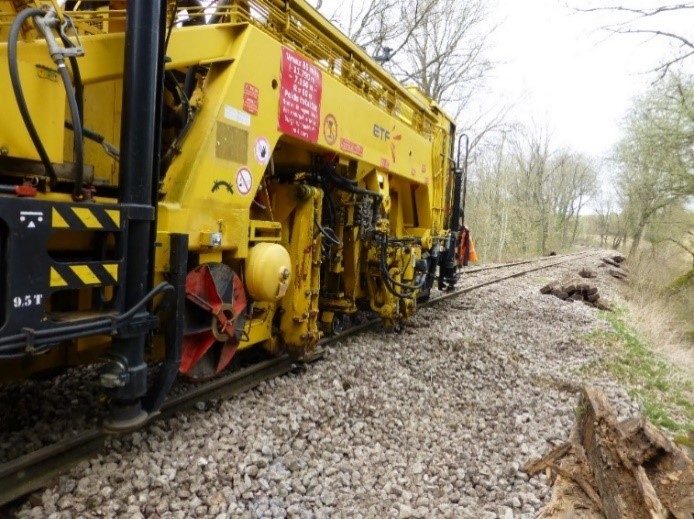 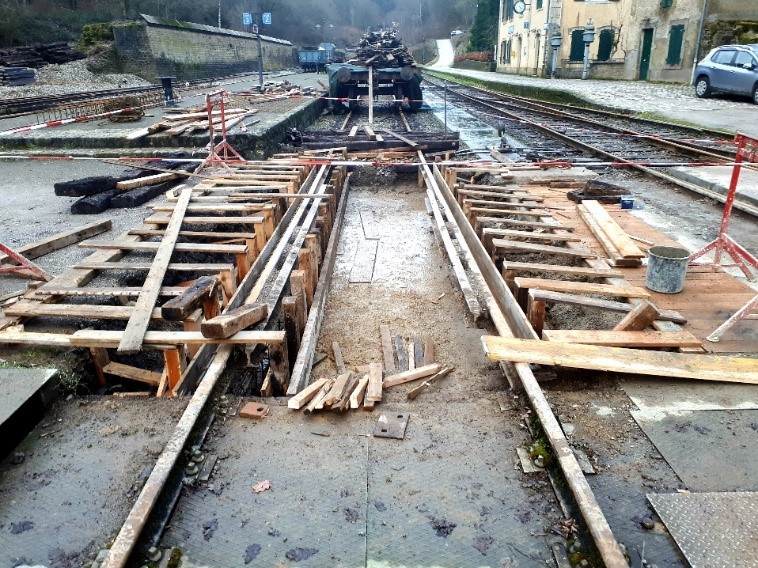 Maintenance of the track

Thanks to the support of the Service des sites et monuments nationaux, it was possible to carry out a maintenance campaign on the track. The work requiring specific heavy equipment was carried out by ETF, a company based in Pétange. At the Fond-de-Gras station, the sleepers, i.e. all the sleepers of a turnout, were replaced or largely renewed on two turnouts. This is the end of a campaign carried out over several years to ensure the stability of the switches renewed between 1987 and 2002. Some of the used timbers were recovered at that time. On the tracks of the station and the track to Rodange, a large number of single sleepers dating from 1987 to 1998 were replaced. The service life of a sleeper is between 25 and 35 years. This has to be done in stages to prevent the track from deteriorating as a whole. In addition, ballast has been added on several sections, with mechanical tamping, to establish a greater cant in curves (making it easier for cars to pass through the small radii).
At the level crossing at Fond-de-Gras station, the sleepers covered by a layer of concrete were beginning to sag under the load. They were replaced by reinforced concrete stringers under the rails. This is a more durable solution that has already been used under the tracks in Hall 1. A task carried out by the ProActif team.

Overhaul of the electric locomotive no. 19R in Meiningen

After a long career at ARBED, this locomotive went into service in 1993 with the mining train “Minièresbunn”. Since then, it has been used to pull the trains between Rodange and Lasauvage via the main driving gallery. After this long period of service, an overhaul was necessary.
Beforehand, certain preparations were made: drawing up plans, listing the work to be done, how to proceed, etc. In addition, the volunteers from the mine train carried out certain work in their workshop in order to lighten the workload of the “DB-Fahrzeuginstandhaltung GMBH” workshop in Meiningen (Germany). In December, the locomotive was taken to the workshop by truck. In February, the volunteers went to Germany to check the progress of the overhaul.
Work was carried out on the following components: locomotive body, wheel sets, bearings, traction motors, drives, brake linkage, air circuit, air brake, mechanical brake, suspension, shock and traction components. 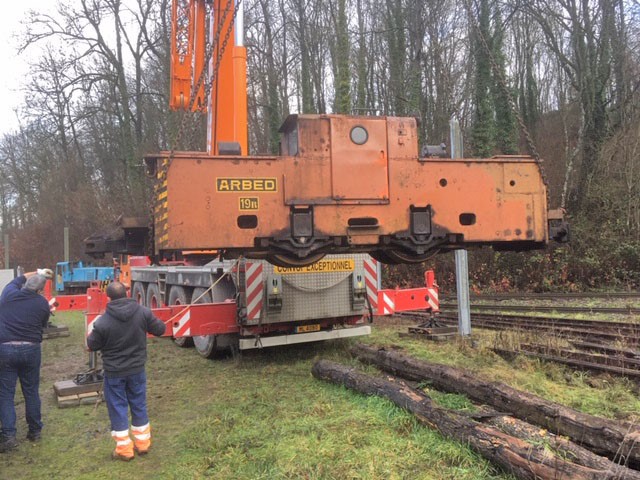 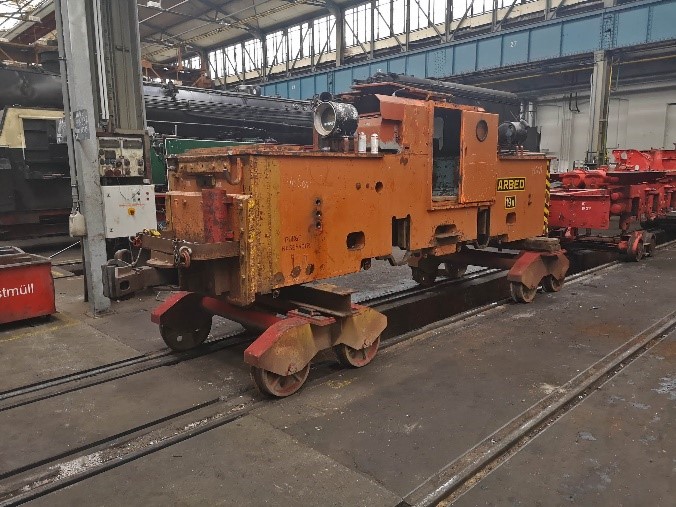 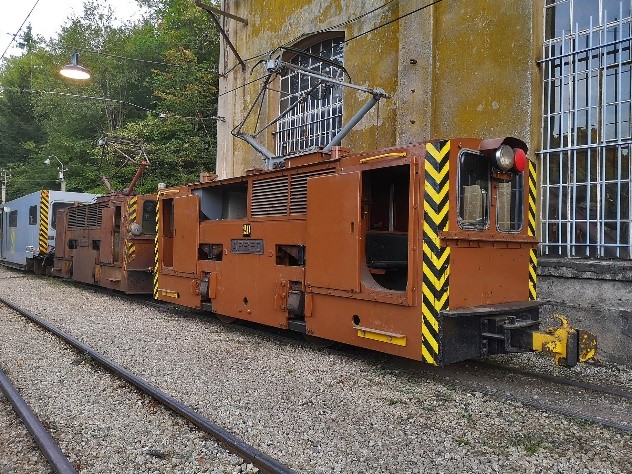 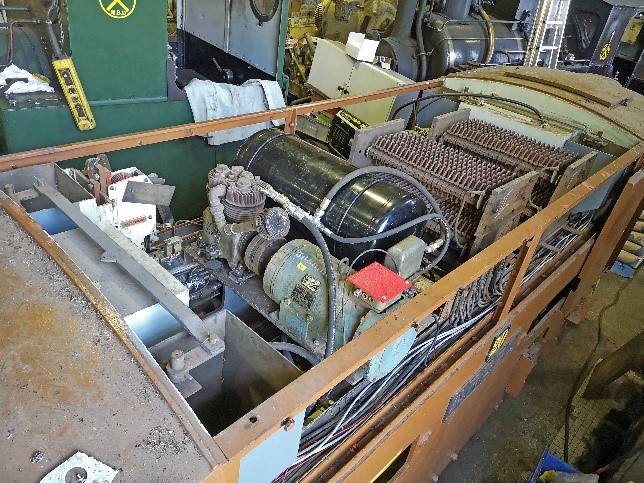 Overhaul of locomotive no. 20

Overhaul of the “red cars” Draisines

The red draisines from 1968, which have been in service at Minièresbunn since the 1990s, are also being renovated.
The following work is carried out: dismantling of all mechanical parts, revision of the axle bearings and brakes, bodywork (dent removal, sandblasting and painting), renewal of the benches, new windows and replacement of the electrical installation. 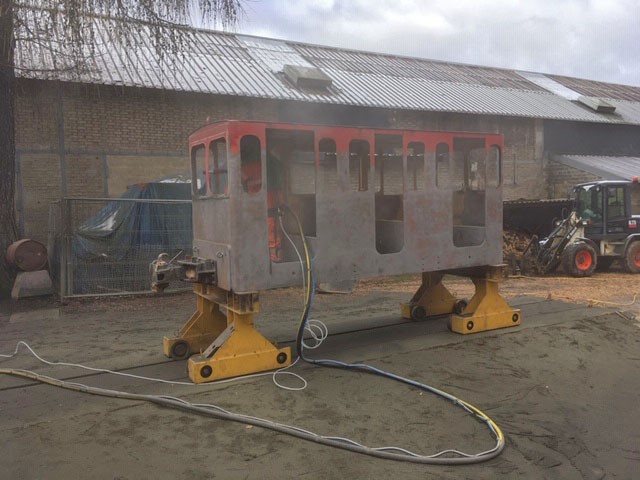 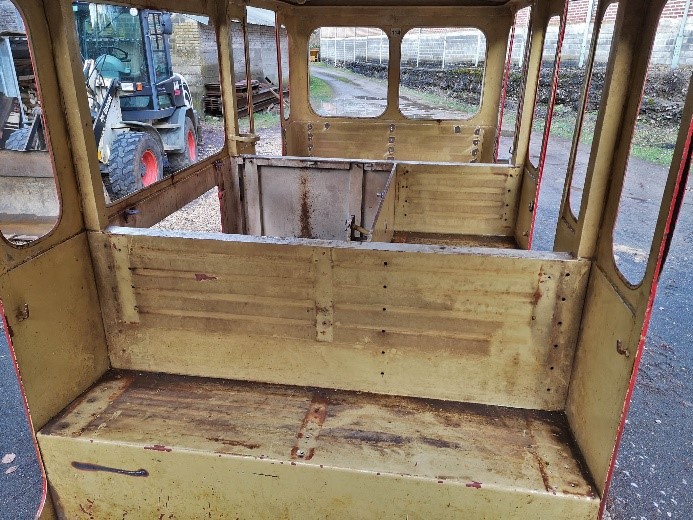 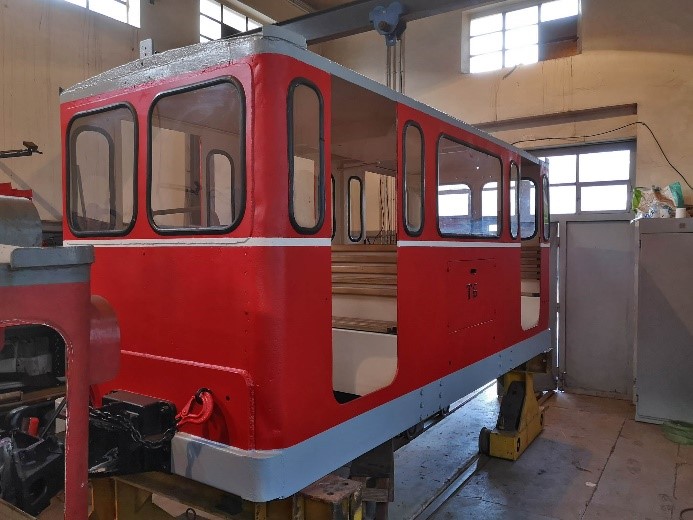 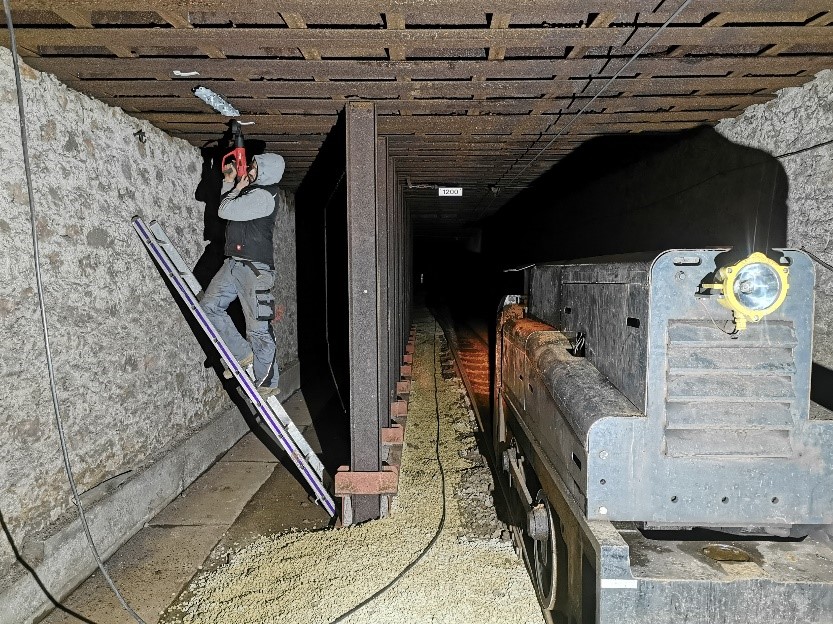 If the locomotives and coaches need work, the volunteers also have to maintain the rest of the rolling stock and the infrastructure on the track:

-At least once a year, the entire mine is checked

-Conversion of a working wagon

-Adaptations to the emergency exit of the “Atelier Fond” in the mine: adjustment of the lighting and widening of the path

From 1 December, a team from ProActif will clear the bushes from the embankments and prune the branches of trees that could rub against cars and injure travellers leaning out of windows. Trees that are deemed dangerous because of their lack of stability are cut down. This work is very selective and is done after consultation with the forest warden, the Ecological Service of the City of Petange and the Syndicat intercommunal Sicona. It must comply with the regulations laid down by the Ministry of the Environment and must be completed by 1 March. All cut wood must be shredded on site, burning is prohibited. However, this work is essential in order to keep the track clear for the trains, to guarantee the view of the staff on the track, to prevent branches or trees from falling into the track and to offer passengers, as far as possible, a panoramic view of the varied landscape through which the historic trains pass. This year, the volume was particularly high because the aftermath of the tornado in August 2019 also had to be removed. At that time, at the height of the season, it was only possible to clear the track for the trains to pass and leave everything in place. 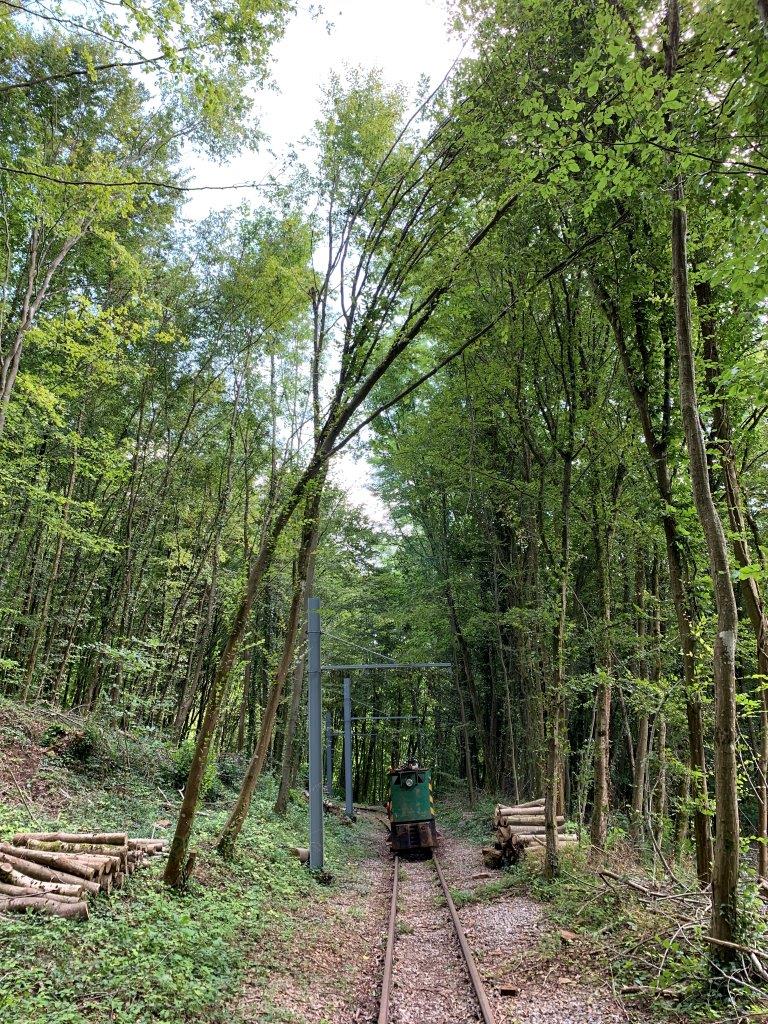 As soon as the authorities judge that a reopening to the public is compatible with health safety measures, the historic trains will resume their regular runs.

Obviously, no date can be given at this stage. It depends on the instructions regarding restrictions on the movement of people and the ban on gatherings.

Until September, all major events that require months of preparation are cancelled.

In the meantime, work by volunteers in the Train 1900 and Mine Train workshops has been halted. Many major projects are on hold, more information in a future Newsletter.