THE STUDENTS PRESENT US 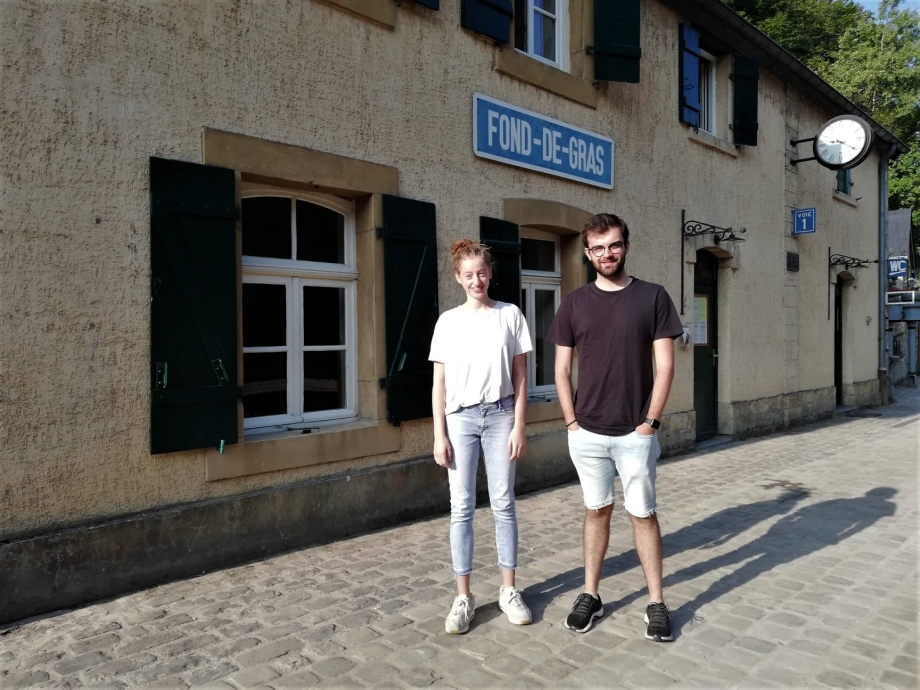 Every year, students (hired by the Ministry of Economy – General Directorate of Tourism) come to work at Minett Park Fond-de-Gras in July and August.
Their tasks are numerous: reception of visitors, supervision of museums, administrative work…
This year in August, we welcomed Julia and Maurice.
We asked them to select 6 objects kept in the old Victor Binck grocery store. They then did a research work to know more about these products. They present them to you today.
My name is Maurice Schwarz (22 years old) and I am a second year history student at the University of Luxembourg. When I was little my grandparents often took me to the Fond-de-Gras because I was fascinated by the old locomotives. For a few years now, I’ve been doing museum supervision at Minett Park on Sunday afternoons. Looking for a job for the summer vacations, I discovered the announcement of the Ministry of Economy. I applied and as fate would have it I ended up at Fond-de-Gras. I am happy because I know people like Robyn and Frédéric (note: employees of the Minett Park Fond-de-Gras) and I admire the efforts that are made to preserve the history of the Fond-de-Gras, the Luxembourg industry, the miners and the old locomotives.
Julia Ariete (20 years) railing in the Fond-de-Gras and translating train descriptions to French. Then I started to like the language but not too much to write my description in French. I am a future acting student and love to try new things. This summer job allowed me to learn about the history of trains and mines. I liked how we got insights on how everything works here, and also connecting with tourist and meeting new people. 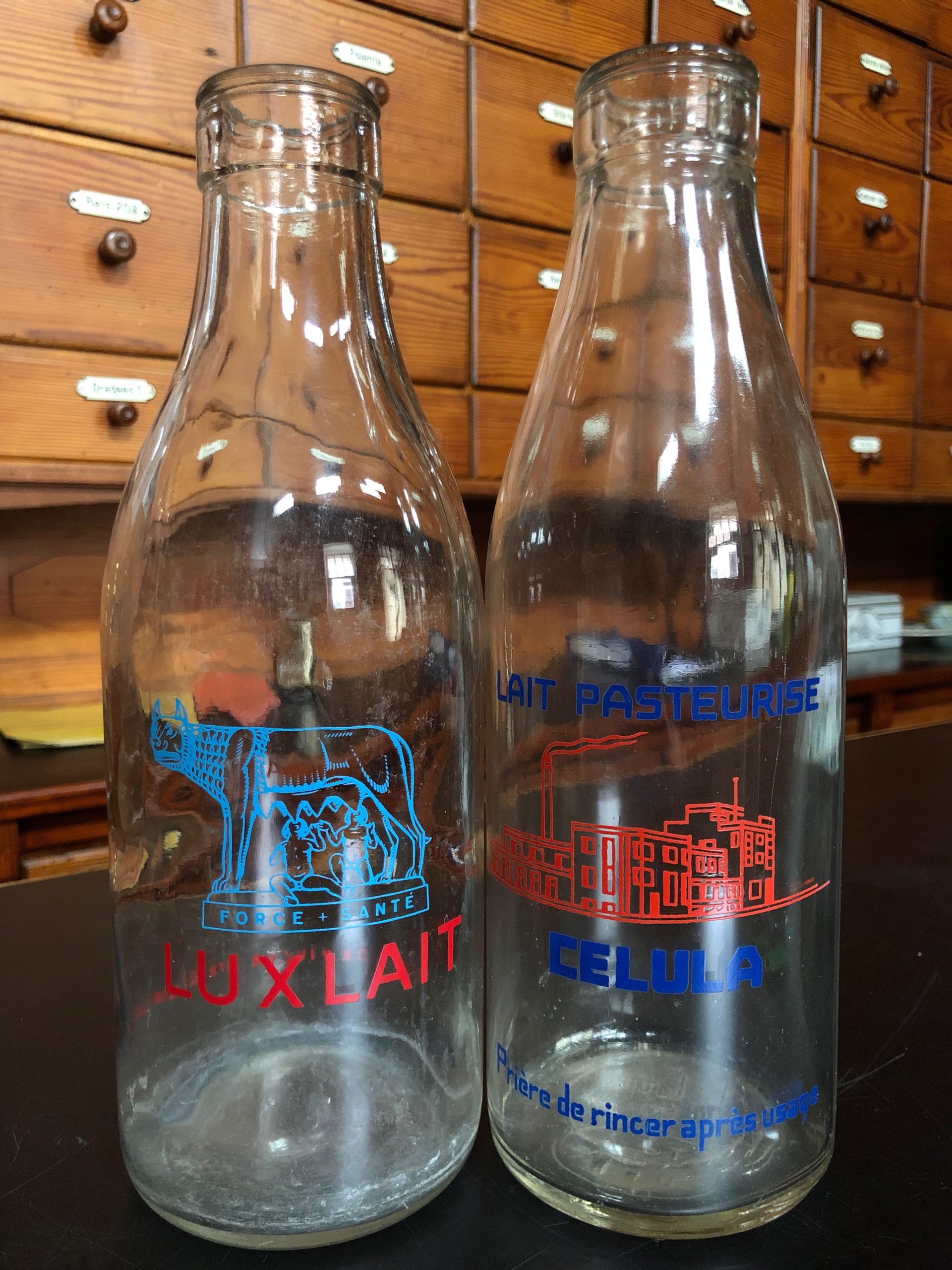 In 1948, there were 180 local dairies in Luxembourg. 30 years later, the last three Luxembourg dairies Celula, LADUNO (LAiterie DU NOrd) and LUXLAIT merged under the name LUXLAIT.
CEntrale LUxembourgeoise du LAit – Celula in Bettembourg,
The Celula dairy was founded in July 1930, its Bauhaus-style factory was located in Bettembourg. In 1939, cheese production was added to the milk production. In 1953 and 1960, a laboratory, a butter factory, workshops and garages were added. The production in Bettembourg is stopped in September 1980.
LUXLAIT

Founded in 1894, the “Central-Molkerei” produces cheese, butter and many other dairy products. The factory was first located in Schieren, Merl and finally since 2009 in Roost.

The product Dextropur Plus still exists today. It is a glucose-vitamin combination with 10 vitamins, which is a fast energy supplier for the need of energy and vitamins. The dextrose flows directly into the bloodstream and supplies the mind and body immediately with vital energy. The body’s reserves are strengthened to better cope with the demands of everyday life.
It can be used as a food enrichment and as a drink.
It is best consumed with tea, cocoa, milk, water, juice, but also with cereals, yogurt, cottage cheese, fruit salad and desserts.
The history of energy sugar begins in 1927 when the German factory Maizena GmBH produces food sugar with the name Dextrose Purum. The sugar was then sold in pharmacies and doctors prescribed it as a means of vitalization.
During the 1936 and 1972 Olympic Games in Germany, Dextro Energen was used as the official supply for the competitions. 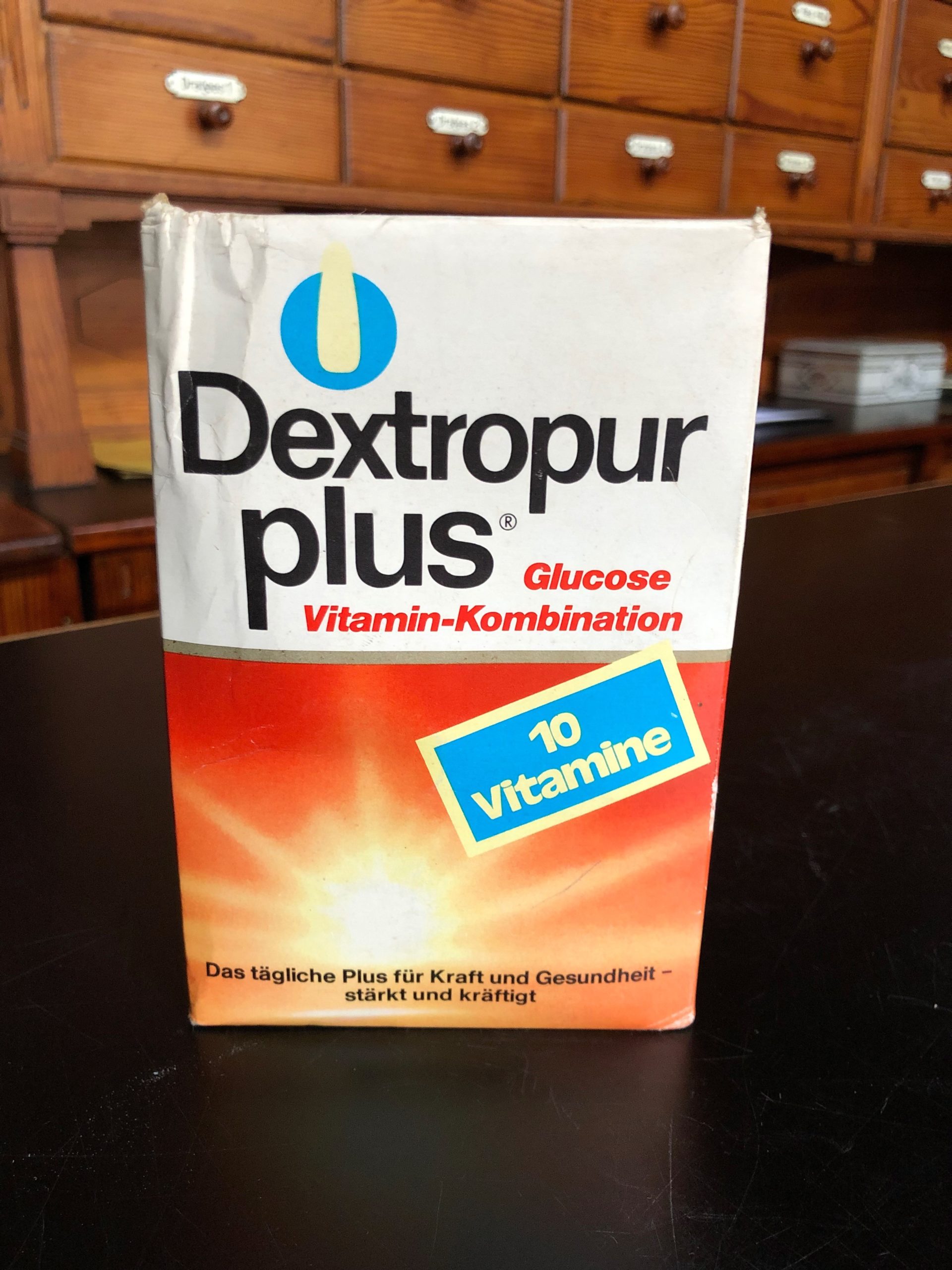 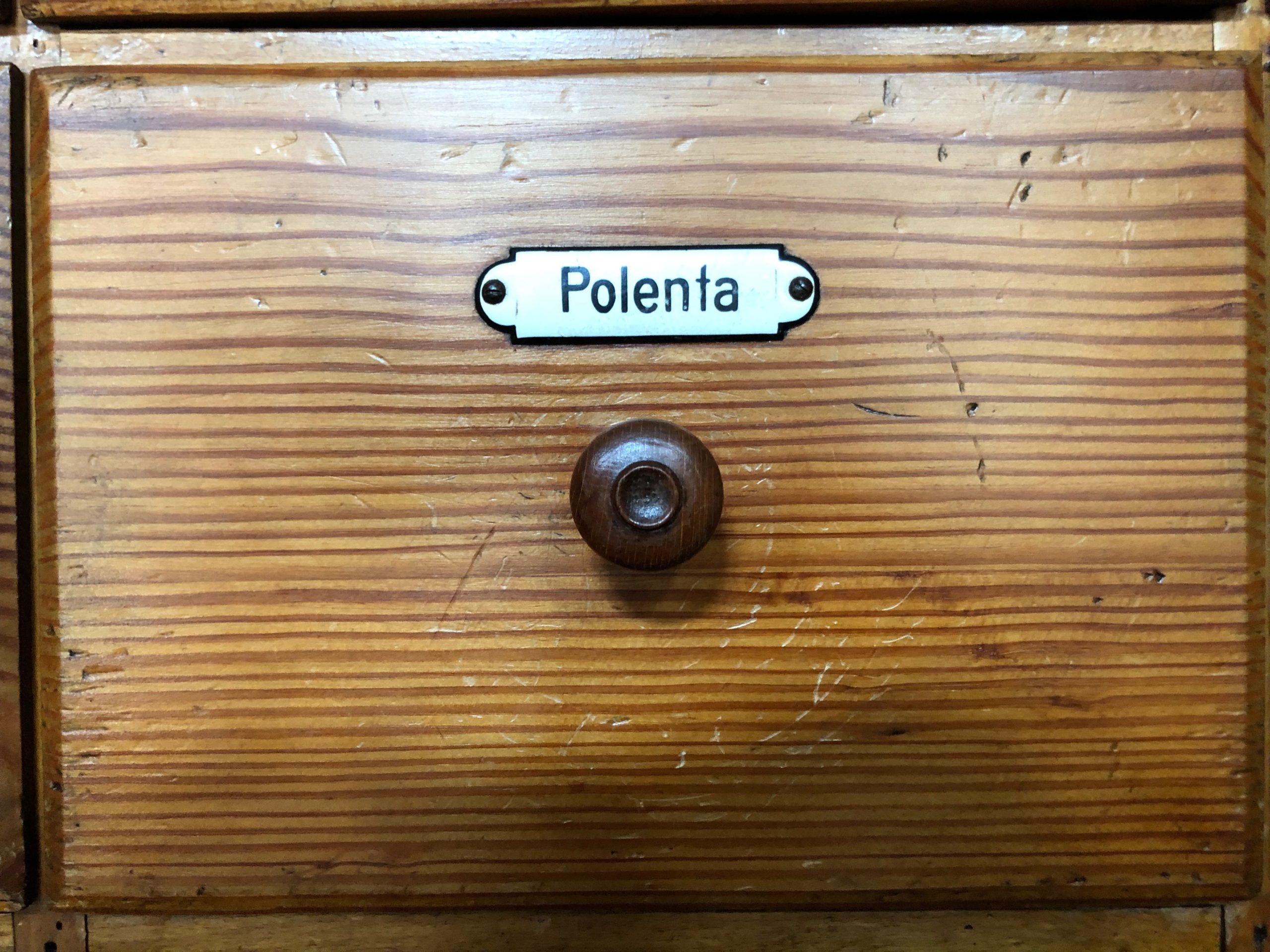 Polenta is a corn flour, served in the form of porridge or cake. Polenta is a gourmet tradition of the southern European countries. More precisely from Spain, Italy, the Balkan countries and Switzerland.
The presence of Polenta in a Luxembourg grocery store is explained by the high number of Italian immigrants who worked in Luxembourg since the end of the 19th century.
At that time, many Italian citizens came to Luxembourg to work in the mines and steel factories because they had no prospects in their country. They tried to start a new life in Luxembourg, which needed a large workforce at that time. Nowadays, many Luxembourgers with Italian roots live in Luxembourg.

The Knorr company was founded in 1838 by Karl Heinrich Theodor Knorr. The company is known for its finished products, including chicory for coffee manufacturers. The founder experimented with dehydrating vegetables and seasonings to preserve their flavors. As a result, the first Knorr® dehydrated soups were marketed throughout continental Europe in 1873.
Today, Knorr has a wide range of products, including spices, sauces, side dishes, broths, salad dressings, smoothies, frozen foods and prepared meals.
The last member of the Knorr family left the company in 1958. Nevertheless, the name Knorr and the production location, Heilbronn, were retained until 1998 before the company was taken over by Unilever.
Knorr Suppen made it possible for people to make soups in a short time. This was of course in the interest of the working class families in the Differdange area. The Epicerie Victor Binck adapted to the requirements of its customers. 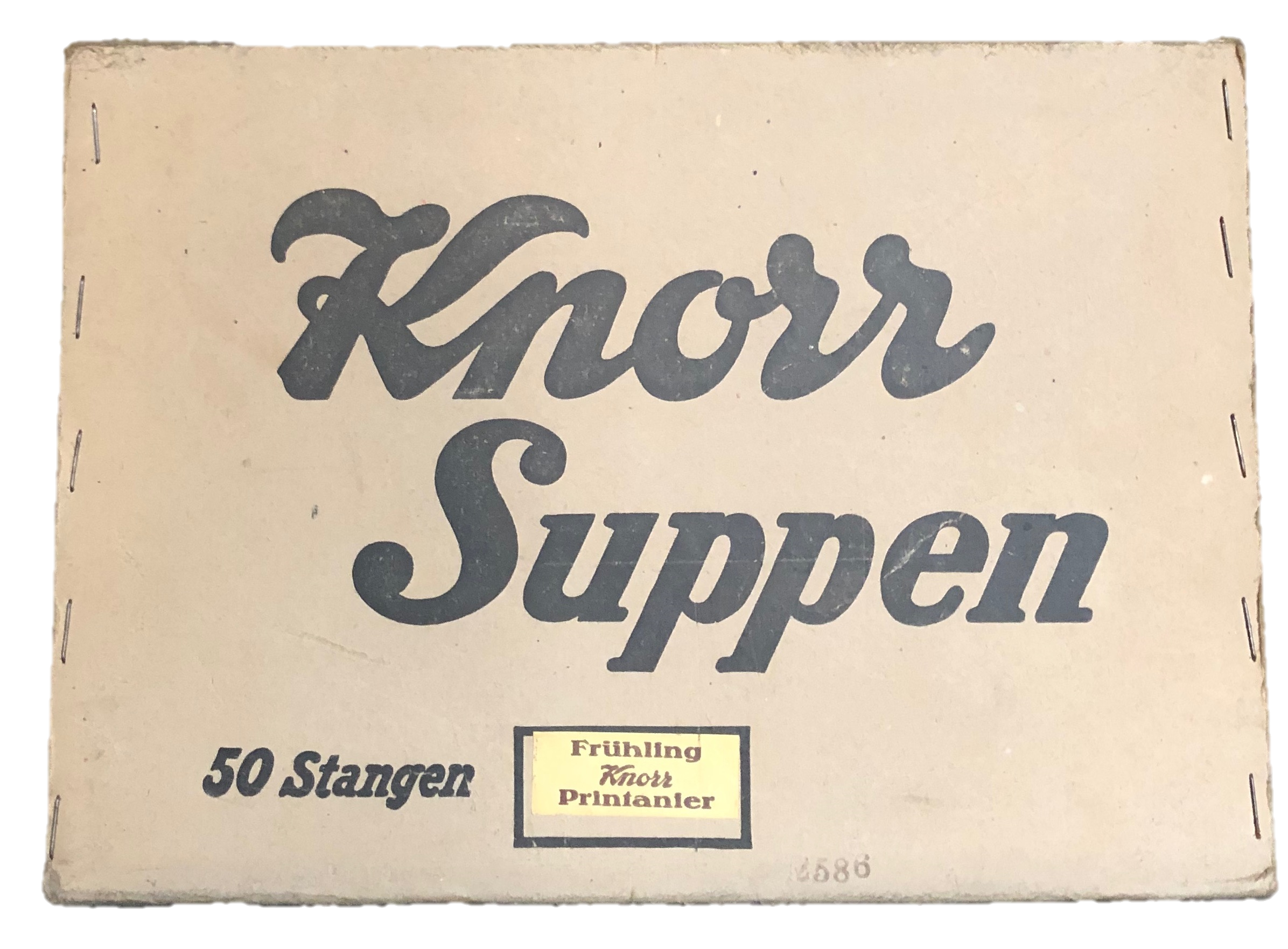 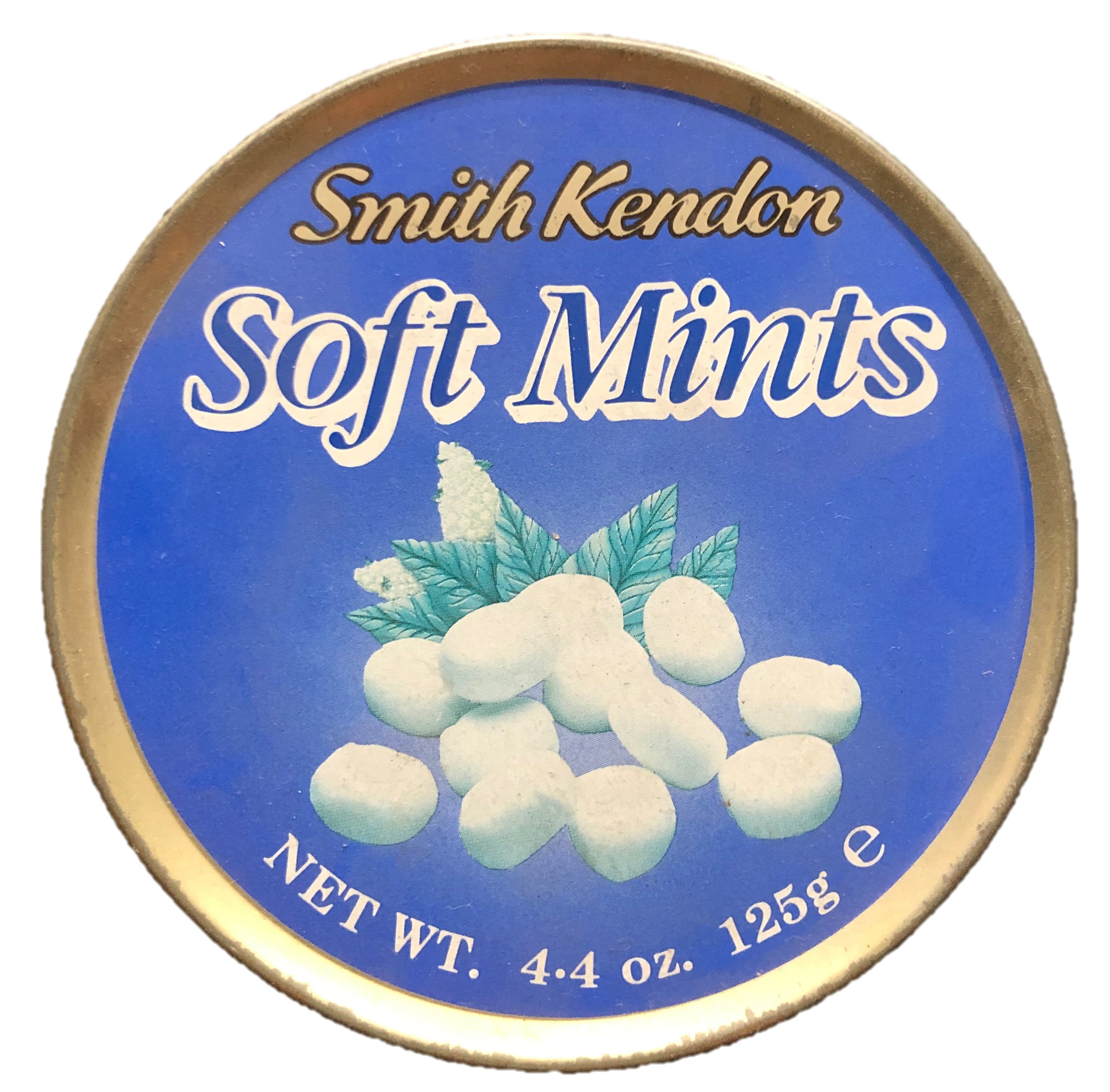 Smith Kendon is an English company. The company is known for the production of candies with various flavors. The round boxes are the distinctive sign of the company.
The company was founded in 1780 under the name Smith&Co. In 1948, the name was changed to Smith Kendon.
After the Second World War, the European economy is moribund. Thanks to rehabilitation programs such as the Marschall Plan, this economy is largely supported and the European market is opened for English and American products. We can conclude that this is the reason why the English product Smith Kendon and the American product Heinz are sold in a grocery store in Differdange.

Piccalilli is a vinegar-based condiment recipe made with chopped vegetables and spices that belongs to the pickle family originating in India. Ingredients may include pickles, cauliflower, onions, green tomatoes, cabbage and potentially a large number of vegetables. The vegetables are first cut into small pieces; they are then blanched and a mixture of mustard, vinegar, salt, sugar and spices, such as turmeric, is added. This spice is responsible for the yellow color of many pickles.
The company
Henry John Heinz, the son of German emigrants, began producing horseradish, pickles, vinegar and a variety of other sauces in 1869. He had the idea to present his products in a transparent glass bottle to show “the quality and freshness of the product”. It was a success and his products were exported all over the world. In 2015, the company merged with Kraft Foods Group. The company is now called The Kraft Heinz Company. The company has a turnover of 30 billion USD. 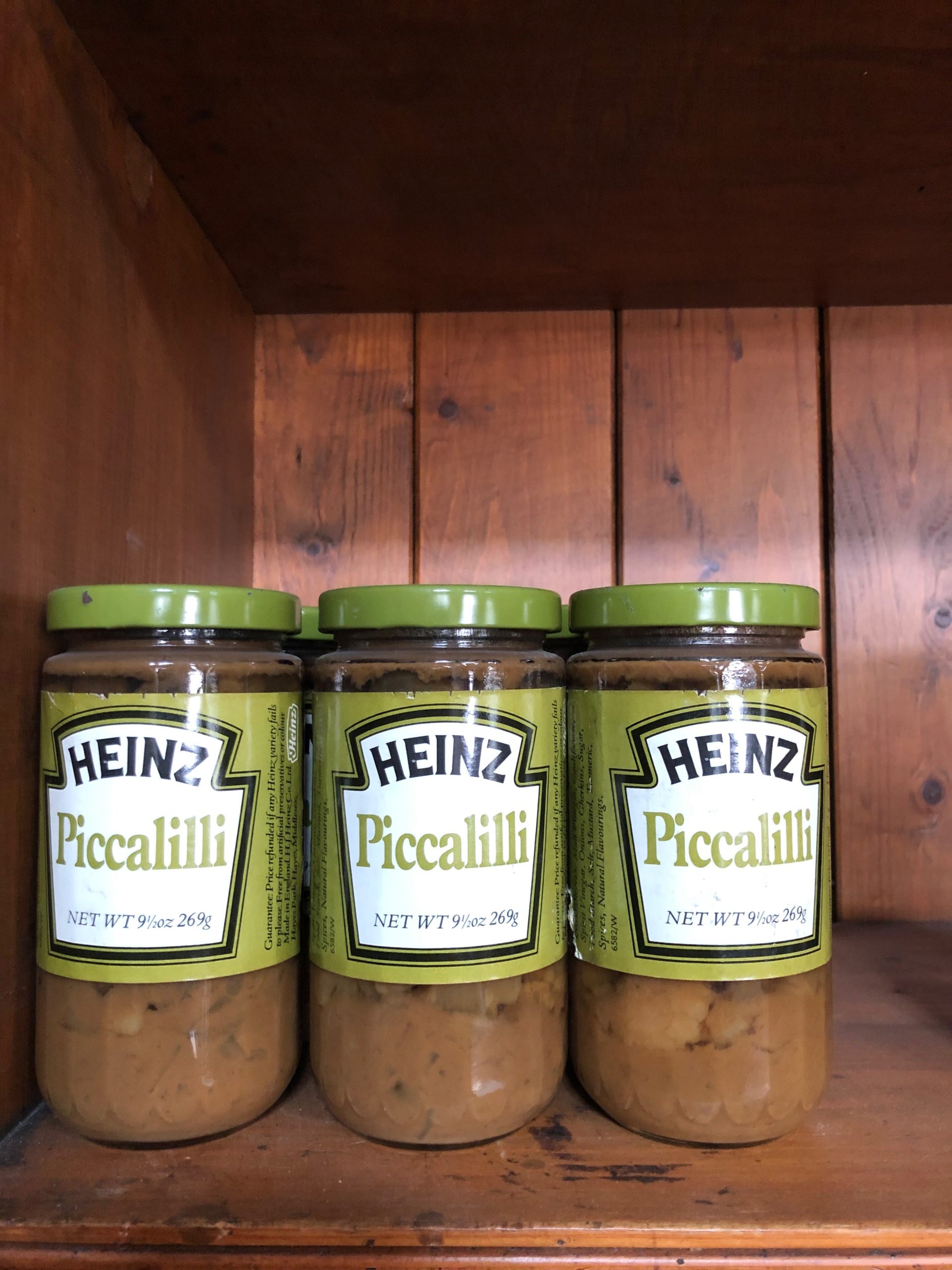 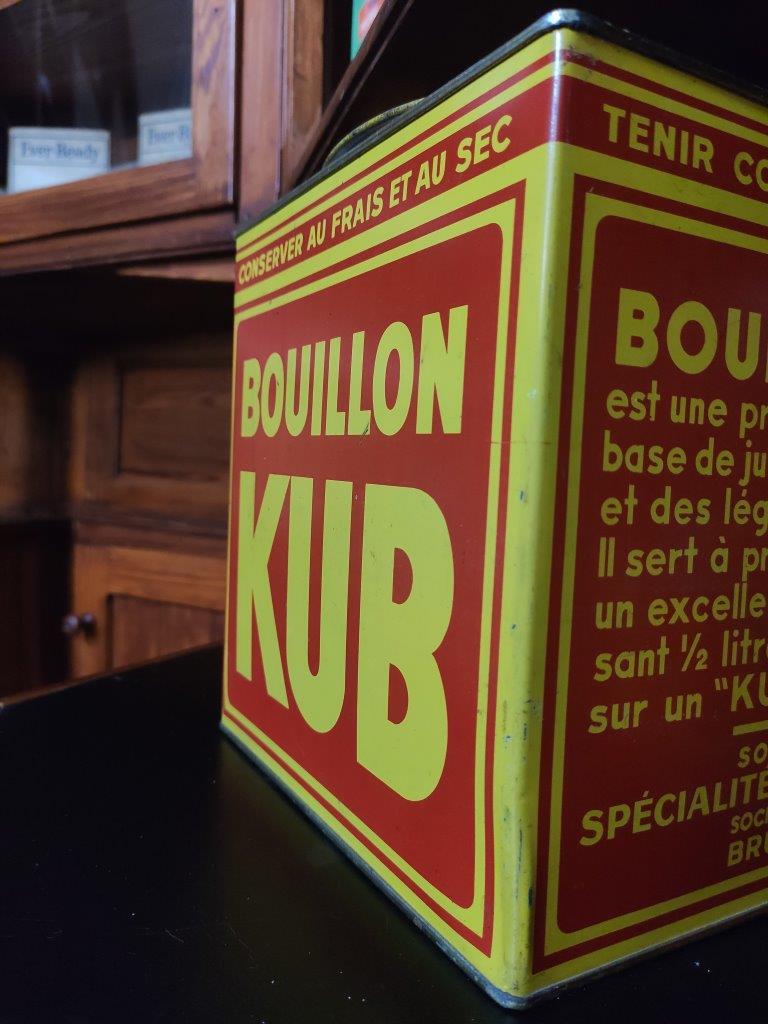 Invented in 1880, Julius Maggi has been marketing dehydrated broth in cube form since 1908. Its main ingredients are: salt, maltodextrin, flavour enhancers, oil and flavourings.
During the Great War, things became more complicated for Maggi. Its KUB broth, with a K, sounded too German to be honest. Rumors circulate: Maggi milk is suspected of being poisoned, the company’s engineers are accused of being spies and the KUB advertising plates fixed on every street corner in France are suspected of being a secret code to communicate the positions of bridges and railroads… And this, while the Poilus continue to consume the broth in the trenches.
The KUB broth was sulked, the advertising boards were taken down, the Maggi offices in the Opera district of Paris were ransacked. Fortunately, this resentment was not long-lasting! At the end of the war, KUB broth regained its place of choice in the kitchens and once again graced the soup and the pot-au-feu.

Large box of “Hacks” lozenges produced in Southport, England by White Hudson & CO. These are throat lozenges with 61% sugar and 31% menthol. These boxes were always placed on a shelf for customers to see and advertise. They show a man sneezing. Today, these tins can be purchased for $40 to $60 on eBay. They are also displayed in museums like here and at the Pender Islands Museum in Canada. 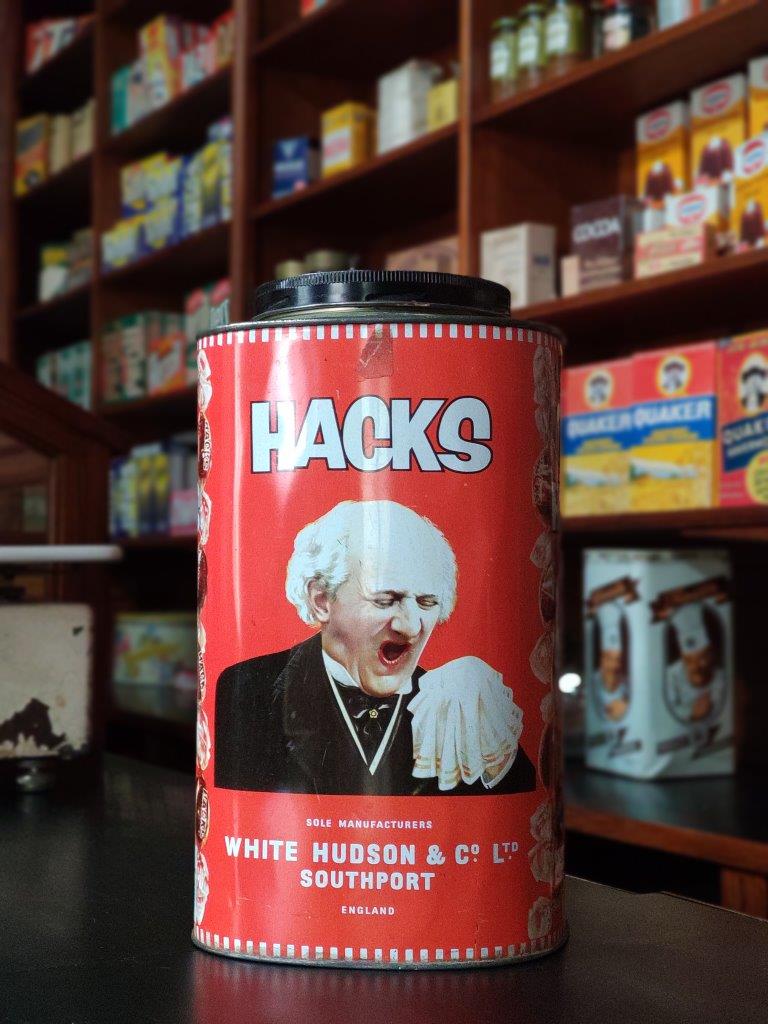 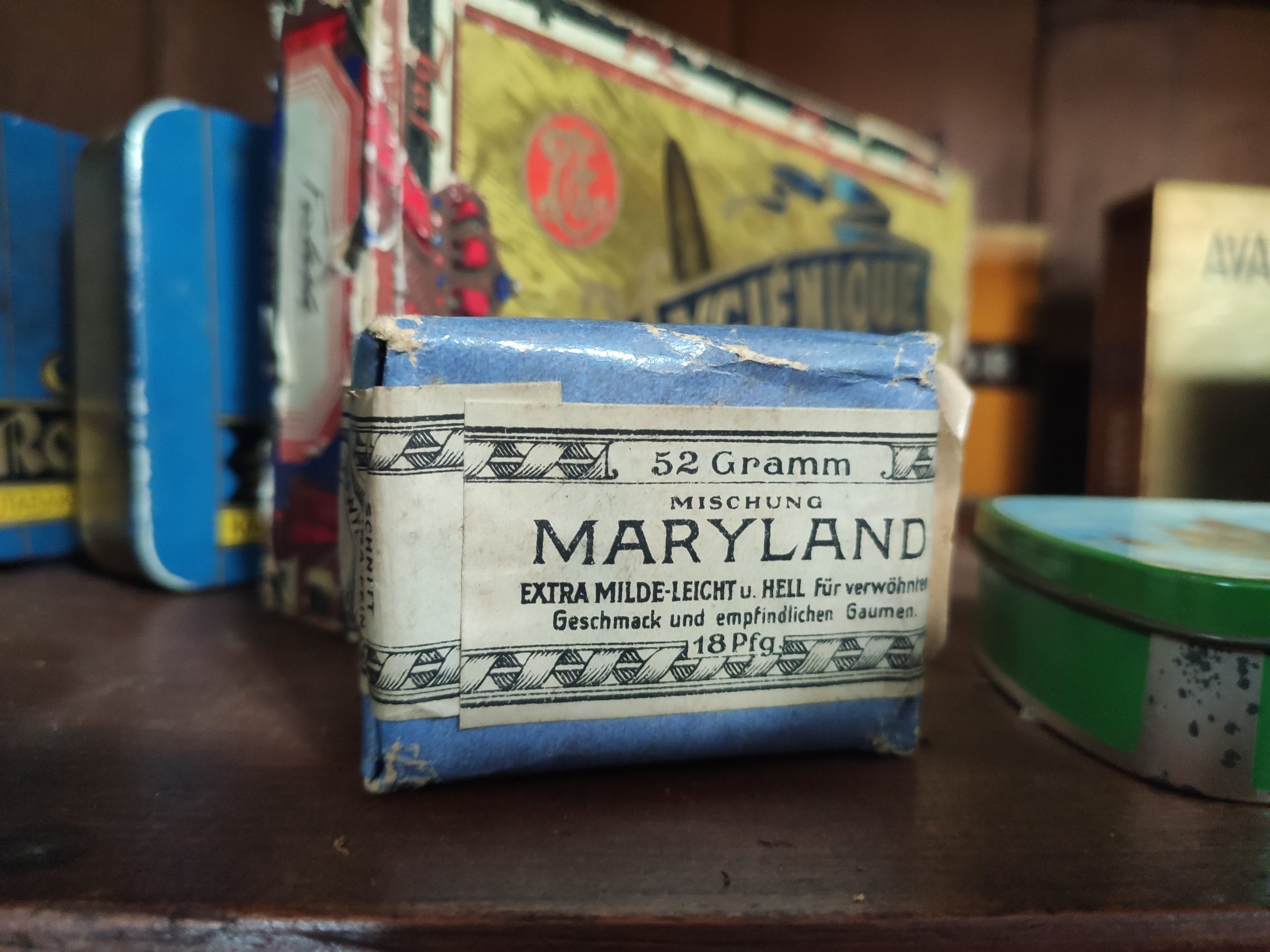 Mild and light air-cured tobacco.
Heintz van Landewyck is an independent Luxembourg company specialized in the manufacture and sale of cigarettes, cigarette tubes and smoking tobacco. Its head office is located in Luxembourg. The parent company was founded in 1847 when Jean-Pierre Heintz, husband of Joséphine van Landewyck, opened his first tobacco factory and business on Rue de la Porte Neuve.
After the Second World War, exports had to be revived and Landewyck relied on the new “Maryland” brand to cope with supply shortages of certain varieties of raw tobacco for the manufacture of safe values such as “L’Africaine”. The brand was very successful in Luxembourg, where it became the symbol of the “everyman” cigarette.
In 1967, Landewyck launched the “Maryland Filter” to follow the worldwide trend of filter cigarettes. They will surpass the “Maryland” without filter in 1970.
In 2013, as it celebrates its 165th anniversary, the Landewyck Group has 6 factories, 1,800 employees, 26 brands and a production of 8 billion cigarettes, 6 billion cigarette tubes and more than 10,000 tons of rolling tobacco per year, all exported to over 40 countries.

The Quaker brand is known for its oats and oat-based products. In 1877, two farmers joined forces to produce high-quality whole grain oats from a small mill in Ohio. Quaker became the world’s first cereal brand.
The term Quaker is a nickname given to members of the Religious Society of Friends (Quakers). The Quakers are known for their honesty, which is why their name has been used to designate commercial brands. Quaker Oats was the first brand of oats introduced in France! A real revolution in the land of buttered bread. 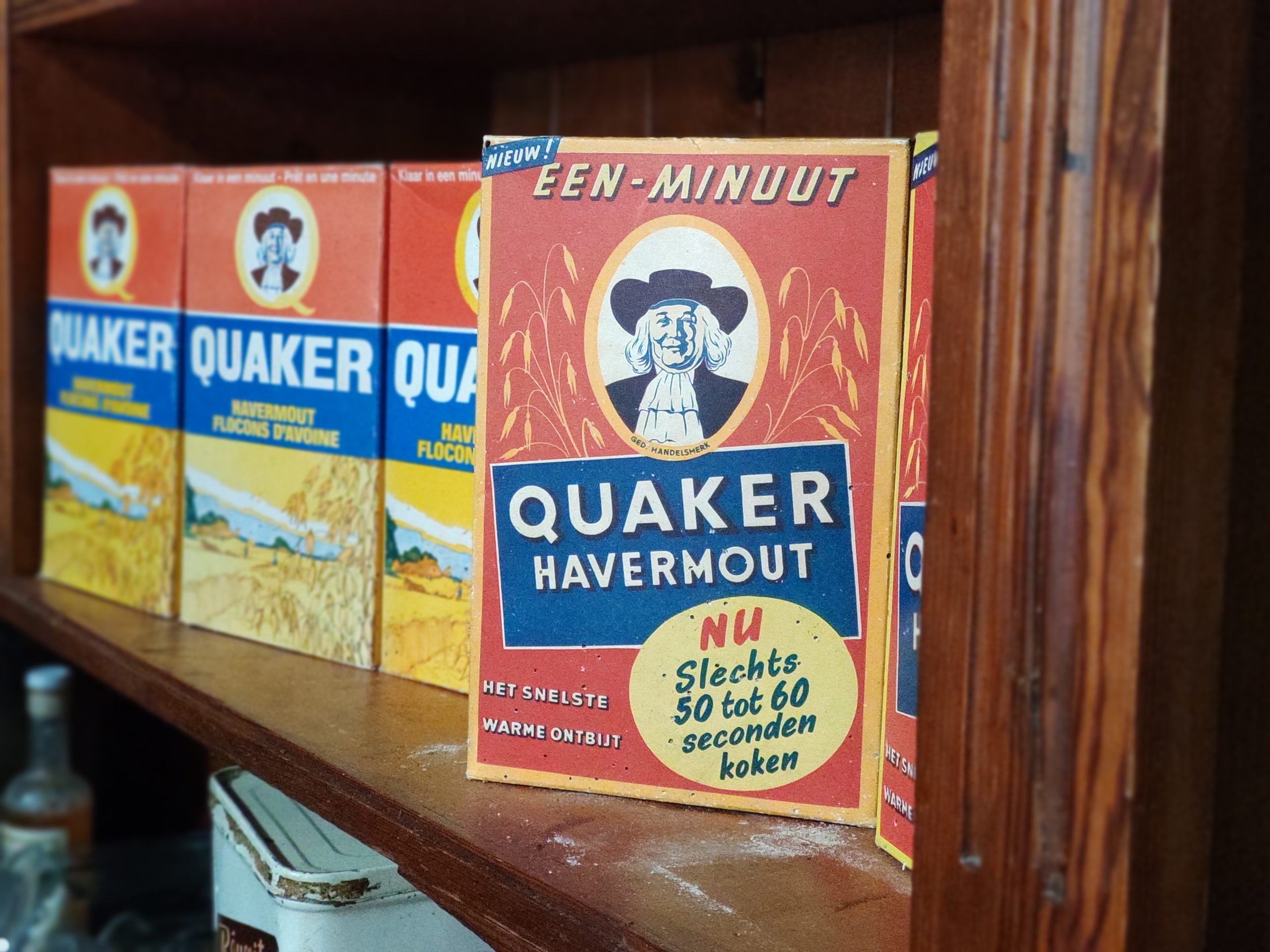 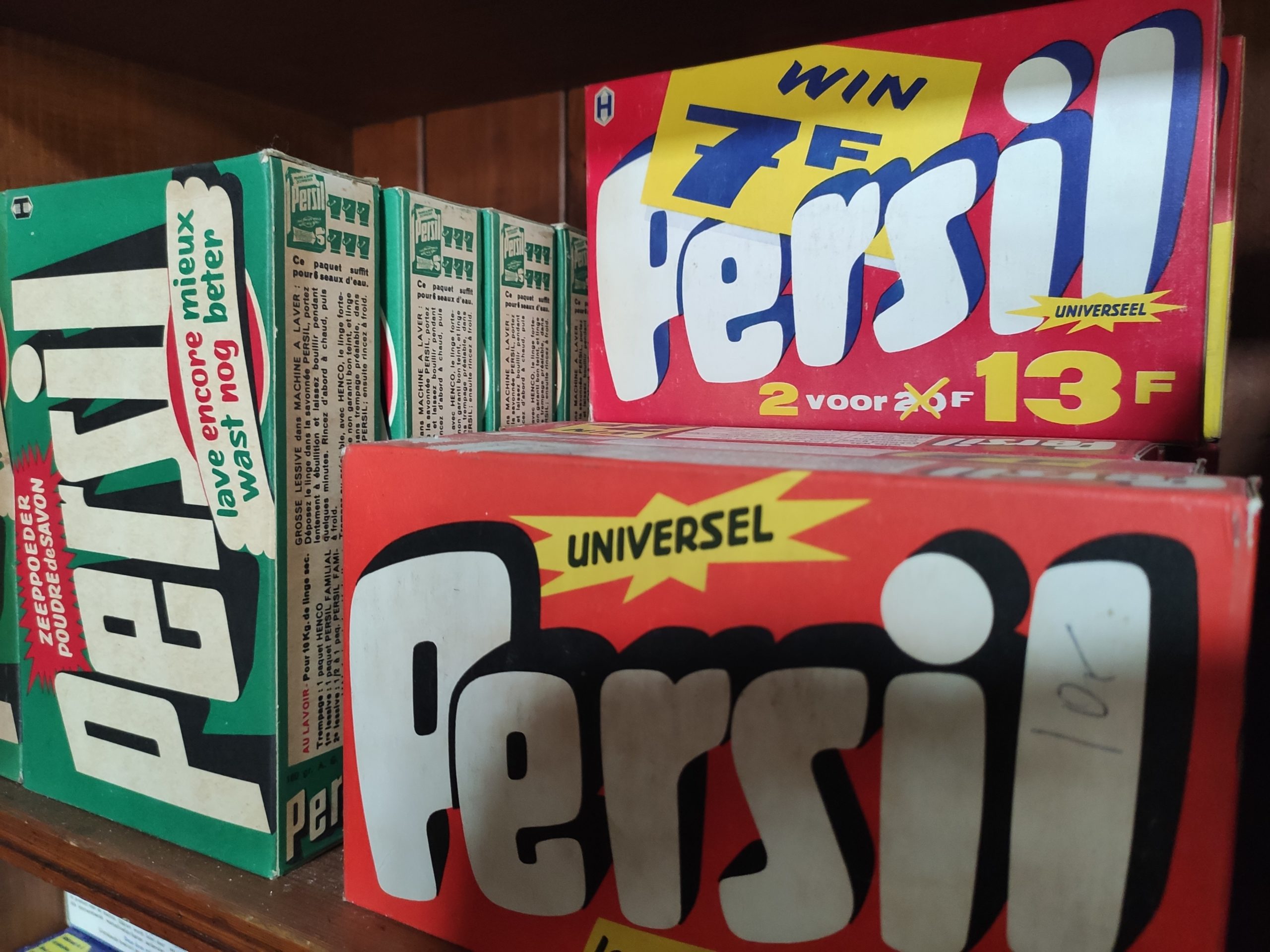 In 1907, the German company Henkel invented a washing powder which it marketed under the brand name Persil. The name consists of the two original ingredients: perborate and silicate, but it is little known abroad. In other countries, the Persil brand is known as Le Chat, Wipp, Dixan, Nadhif and Fab. Persil is making its way into the retail trade, packaged in thin cardboard boxes with printed paper packaging and filled by hand. Persil was the first self-active laundry detergent. Its revolutionary formula that releases oxygen during the wash reduces the friction of the laundry. Persil has always been a pioneer brand in the service of the new needs of our society, combining innovation and tradition. This is why it still exists today.

The cookie factory develops quickly thanks to the production of madeleines, boudoirs, wafers and macaroons, as well as Petits Bretons which are no longer manufactured today. The cookie factory will also produce, during the First World War, the “hard bread”. This war bread feeding the soldiers will inspire the cookie factory to produce the famous Casse-Croûte, which it will manufacture from the 1920s. And soon the idea of adding a little fantasy with a layer of chocolate in a Choco Cas’Croûte was born, which quickly became the Choco BN that everyone knows and which made the success of the brand. 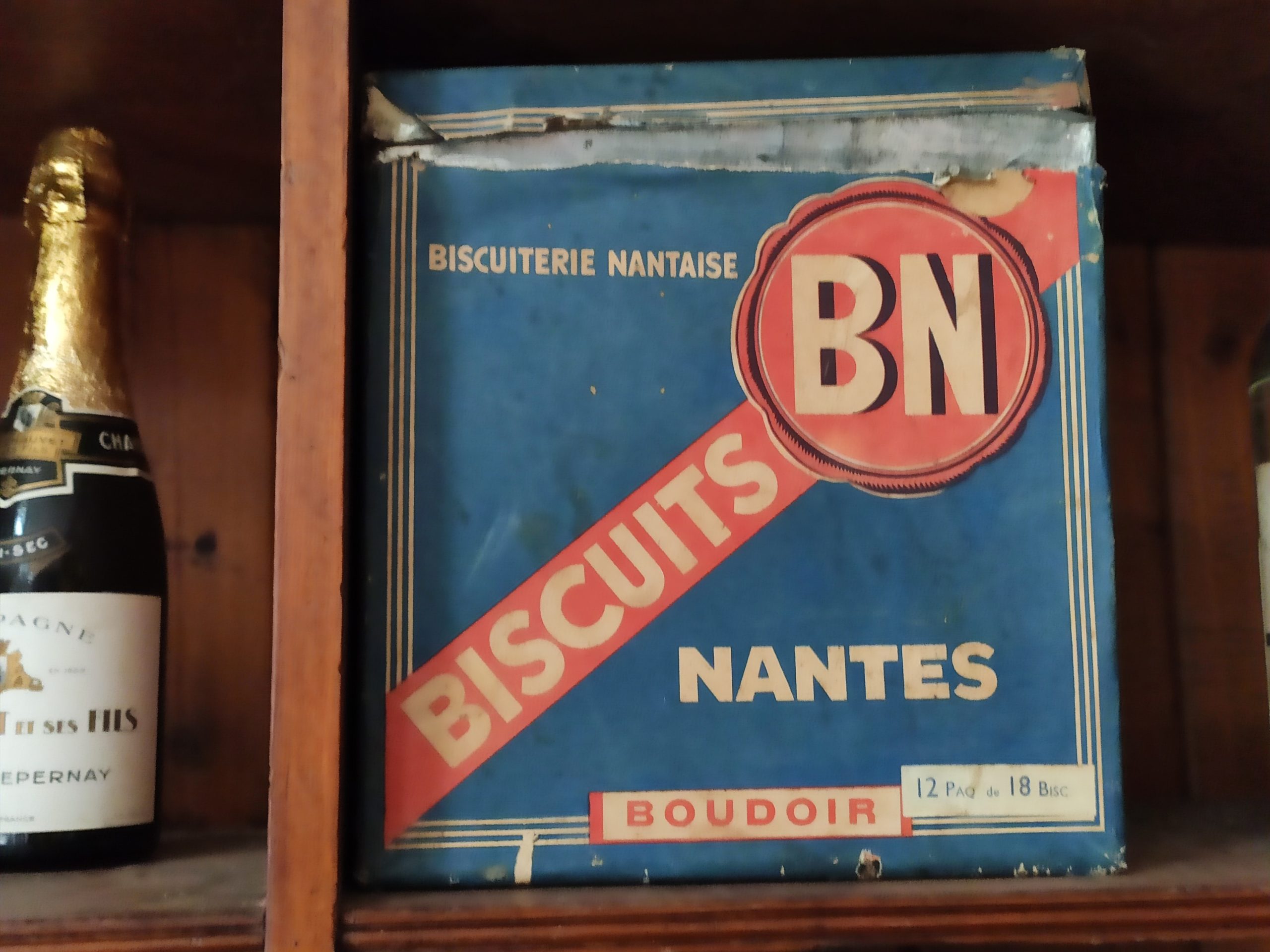